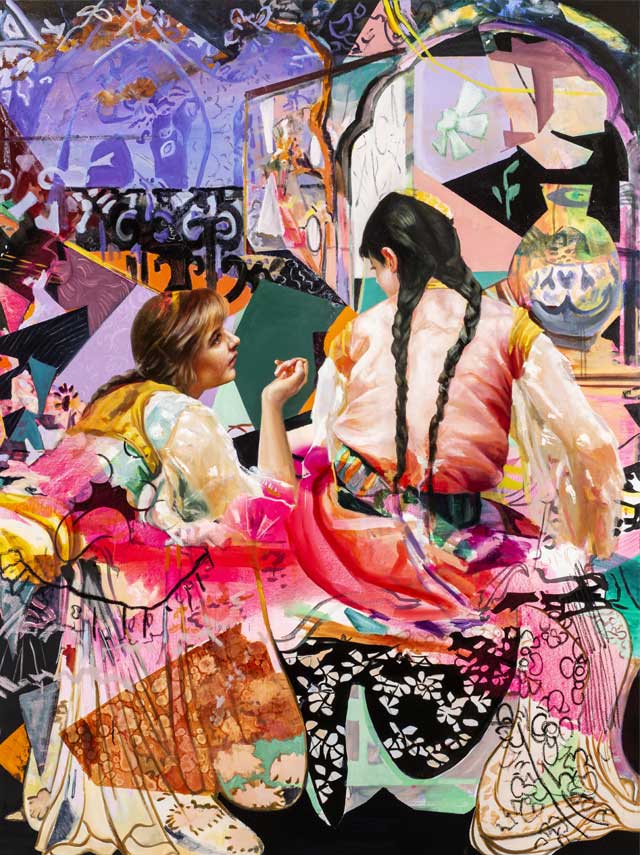 Angela Fraleigh, Splinters of a secret sky, 2021 (detail). Oil on canvas, individual painting from larger installation, 96 x 72 in. © Angela Fraleigh.
Splinters of a Secret Sky premiered three new works by Angela Fraleigh that were inspired by her extensive research on Dr. Claribel Cone (1864–1929), Etta Cone (1870–1949), and Etta’s bequest of 242 works of art to the museum. In conversation with works by Pablo Picasso,  Henri Matisse, Marie Laurencin, and Louis Favre that the sisters had collected, the exhibition revealed new ways to appreciate the Cone collection, the extraordinary lives of the Cone sisters, and the value of preserving an extraordinary collection at the Weatherspoon Art Museum. The exhibition reminds us of what endures, what we value, and how we can and should nurture it with and for the next generations.

In her work, Fraleigh combines images of female figures culled from 18th-century paintings with selected patterns and forms lifted from artworks in the Weatherspoon’s Cone Collection, as well as from photographs of the Cone Sisters’ apartments. Combined energetically and with vibrant colors, the historic array of elements come together with striking dynamism—an energy that we imagine Etta and Claribel would love. In describing her title for the work, Fraleigh noted that “I like to think they created a secret sky of sorts, not only for themselves, but for the rest of us. Visionary collectors and stewards of a new way of seeing.”

Over the past 10 weeks, we’ve had the privilege of witnessing that vision play out as UNCG students and members of the community came to study and respond to both Fraleigh’s paintings and the Cone Collection. To cite just two examples: music students used both as sources of inspiration for improvisational duets, and art history students used both to consider the developments of modernism. Faculty member Dr. Emily Voelker shared how much her students loved their visit, stating “I think it was the most energized conversation we've had all semester.” Such lively dialogue is exactly what we hope to foster at the Weatherspoon.

Realizing the power of Fraleigh’s work, the Weatherspoon’s curatorial team has decided to purchase one of the paintings for our permanent collection. We’ve selected what was the centerpiece painting from the installation, which features the most direct references to the Cone collection and the Cone sisters, and was most relevant to teaching and learning at the museum.

We are inviting you, as a member of the Cone family, to participate in the Weatherspoon’s acquisition of this important painting, considering its significance to the Cone Collection and Etta and Claribel’s legacy of collecting and philanthropy.
GIVE TODAY