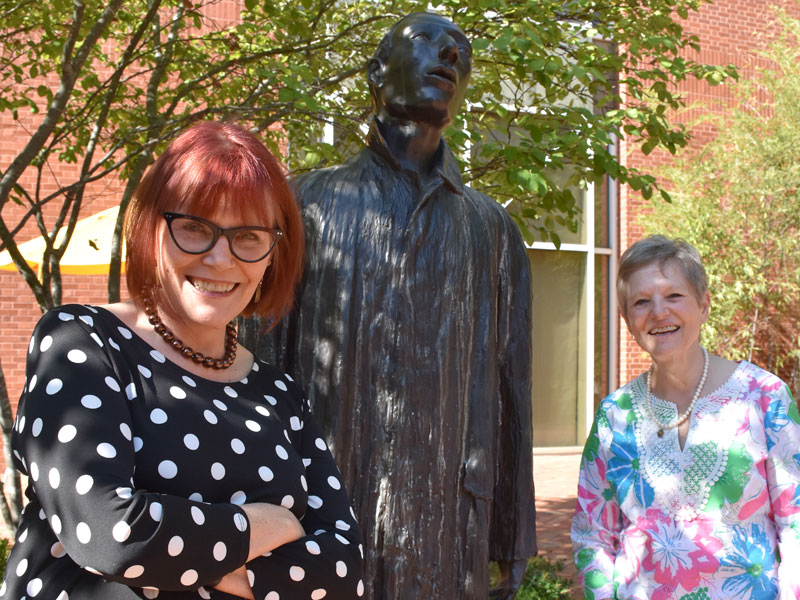 The Weatherspoon Art Museum at UNC Greensboro is excited to announce the establishment of the Sherrill/Gingrow Docent Education Endowment Fund, the first of its kind to provide transformational opportunities for docent education and gallery instruction programs at the Museum.

Volunteer Weatherspoon docent Sydney Sherrill Gingrow and her sister Sharon L. Sherrill established the endowment in memory of their parents, Clark A. and Norma D. Sherrill, who championed both art and education. Despite neither having college degrees themselves, Clark and Norma Sherrill celebrated their daughters’ college degrees and subsequent careers in higher education.

Clark was a WWII Naval veteran with a later career in public works, emphasizing recycling and waste management. He also held patents on several inventions, one being the first front-ended leaf loader. His wife, Norma, was a homemaker, consummate bookkeeper, and accomplished bridge player. In his seventies, Clark became a self-taught artist, creating thousands of sculpted and carved assemblages, both representational and abstract. His love of art influenced his granddaughter, Alex (B.A. Guilford College, M.F.A. SCAD), who is an accomplished artist herself. As Clark and Norma became more financially able, they established a charitable foundation and entrusted their daughters Sherry (B.A. Guilford College, M.A. Wake Forest University, Ed.D. UNCG) and Sydney (B.A. and M.S. University of Tennessee) with identifying institutions that reflected the Sherrills’ shared vision of justice, equality, and diversity through arts and education.

The Sherrill/Gingrow Docent Education Endowment Fund will be used to enhance volunteer docent education and gallery instruction programs at the Weatherspoon Art Museum. The Weatherspoon’s Docent Education program began in the early 1960s and continues to play an invaluable role by introducing youth and adults to modern and contemporary art. Currently, the program’s twenty-five volunteers engage with more than 5,000 visitors annually through guided tours and visual literacy classes, while also serving a growing number of K-12 and college students, families, and adults with special needs.

Curator of Education Curator Ann Grimaldi says, “The Weatherspoon Docent program has a long history of meaningful engagement with visitors in ways that are not always visible to the general public. This endowment will help us provide continuing education opportunities and teaching resources to support and grow this essential volunteer endeavor. Our docents love art and more so love sharing it with new people each day.”