Weatherspoon Atrium Gets a New Mural by Artist Sheena Rose 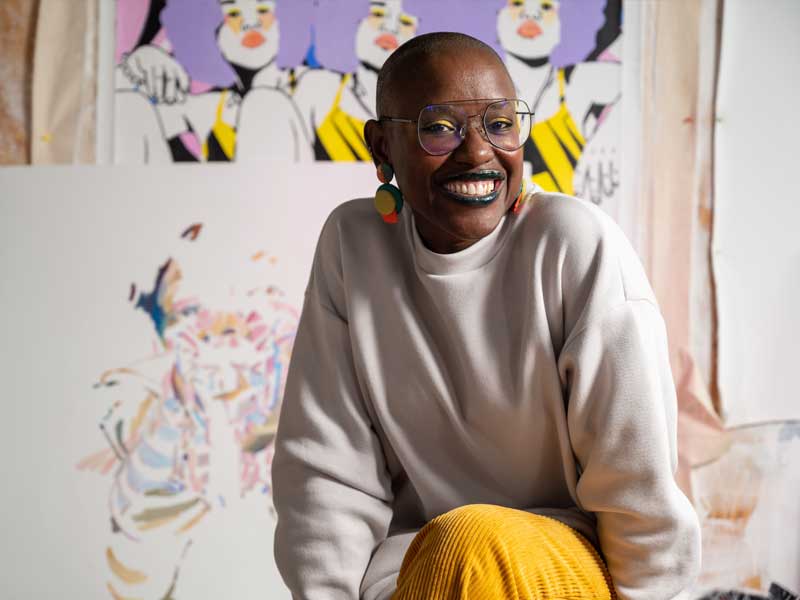 The Weatherspoon Art Museum at UNC Greensboro will debut a dynamic mural in its atrium commissioned from artist Sheena Rose. The project will be on view beginning June 12.

A homecoming is in the works. The Weatherspoon is excited to announce its commission of a major new artwork by artist Sheena Rose, UNC Greensboro MFA ’16. A multidisciplinary artist working in animation, drawing, painting, and performance, Rose’s vibrant and energetic work is at once anchored in her Caribbean heritage and expansive in its explorations of culture and human experience.

A native of Barbados, where she continues to live and work, Rose attended UNC Greensboro as a Fulbright Scholar from 2014 to 2016.

“UNCG gave me a place to think about where I come from—my race, gender, sexuality, and culture as a Black woman from the Caribbean,” she said, reflecting on her time in North Carolina. “It gave me a chance to face myself and move forward with brave steps and to take risks in the studio.”

Since graduating, the artist has had her work featured internationally and recently received the 2020–2021 UNC Greensboro Distinguished Alumni Award in the College of Visual and Performing Arts.

For the Weatherspoon’s atrium, Rose is creating a large-scale mural rich in colors and patterns, each of which she links to a particular thought about our current moment in time. While working on the commission, she said she’s been thinking about such terms as: “reflection, future, new era, anxiety, fears, positivity, new movement, new language, innovation, creative, flexible, observant, listen, meditation, pause, and breathe.” The last two words from this list provide the work’s title: Pause and Breathe, We Got This.

Due to the difficulty of traveling during the pandemic, Rose and the Weatherspoon staff worked together on a new creative approach involving the digital translation of multiple paintings and drawings. Rose says she is excited by “how the digital process is adding more to my concept and to my questions about this new era we are living in. It is like a new language, new habits, and a new norm. The work feels very relevant to this current time—from the painting and drawing in Barbados, to the emails and Zoom calls, to the computer programs and machinery that will allow the work to exist in North Carolina. #DigitalMagic.”

This commission was organized by Dr. Emily Stamey, Curator of Exhibitions.

To learn more about the project, visit the Weatherspoon’s website, weatherspoonart.org.