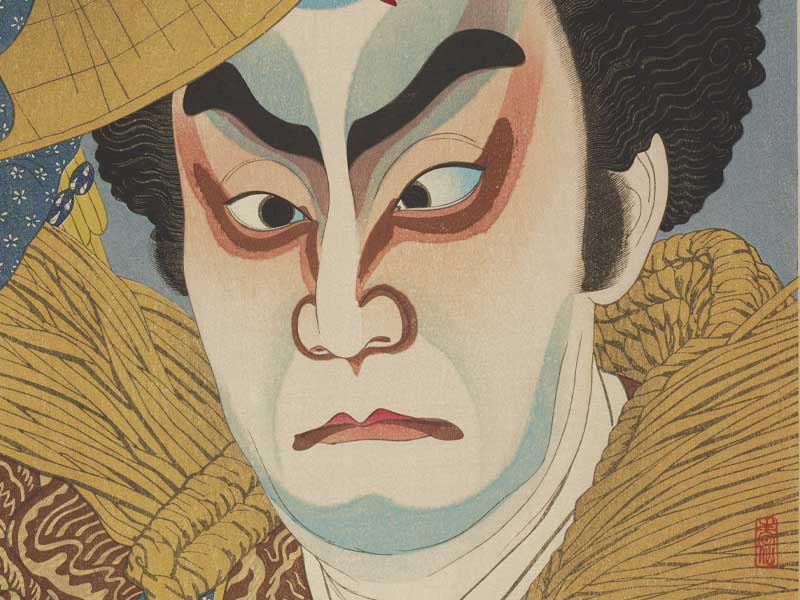 The Weatherspoon Art Museum at UNC Greensboro is pleased to announce Seven Masters: 20th-Century Japanese Woodblock Prints, an exhibition showcasing an art form (shin hanga) developed by a small group of artists in response to Japan’s rapid Westernization and industrialization at the beginning of the 20th century. Shin hanga mingled the old with the new, creating beautiful, enticing pictures that were widely reproduced as prints of almost unsurpassed quality. Seven Masters is on view at the Weatherspoon Art Museum at UNC Greensboro from September 10 through December 4, 2021.

As the nation of Japan ended two hundred years of self-imposed isolation and began to assimilate a new, Westernized culture, demand for certain traditional handicrafts fell off significantly—among them, the iconic woodblock prints known as ukiyo-e, or floating world pictures. Publishers and artists slowed production and created fewer new designs. Yet what seemed at first to be the death-knell of a unique art form without parallel in the world turned out to be the dawning of another, as the path was cleared for a new kind of print: shin hanga.

The exhibition Seven Masters: 20th-Century Japanese Woodblock Prints focuses on seven artists who played a significant role in the development of the new print, and whose works boldly exemplify this new movement. Drawing from the superb collection at the Minneapolis Institute of Art, the exhibition features the spectacular beauty portraits of the artists Hashiguchi Goyō (1880–1921), Itō Shinsui (1898–1972), Yamakawa Shūhō (1898–1944), and Torii Kotondo (1900–1976); striking images of kabuki actors by Yamamura Toyonari (Kōka; 1886–1942) and Natori Shunsen (1886–1960); as well as the evocative landscapes of Kawase Hasui (1883–1957). These multi-talented artists were all successful painters as well, but this exhibition looks exclusively at their unrivaled work in print design, and includes a cache of pencil drawings and rare printing proofs to offer insight into the exacting process of woodblock printing.

Curator of Collections Elaine D. Gustafson, who facilitated the exhibition’s presentation at the Weatherspoon, shared the museum’s delight in being able to host the exhibition since it owns over 400 Japanese woodblock prints itself. “This loan exhibition presents an opportunity to deeper explore and better understand a segment of our collection that often cannot be put on display due to the works’ sensitivity to light. The three themes highlighted—images of beautiful women, landscapes, and famous Kabuki actors—have appealed to our visitors in the past and undoubtedly will continue to engage all audiences.”

About the Exhibition Curator
Dr. Andreas Marks is the head of the Japanese and Korean Art Department at the Minneapolis Institute of Art. From 2008 to 2013, he was the director and chief curator of the Clark Center for Japanese Art and Culture in California. He has a PhD from Leiden University in the Netherlands and a master’s degree in East Asian Art History from the University of Bonn. A specialist in Japanese woodblock prints, Marks is the author of 14 books; his Publishers of Japanese Prints: A Compendium is the first comprehensive reference work in any language on Japanese print publishers. In 2014 he received an award from the International Ukiyo‐e Society in Japan for his research.

A catalogue, Seven Masters: 20th-Century Japanese Woodblock Prints from the Wells Collection by Dr. Andreas Mark, is available for purchase locally at Scuppernong Booksellers as a softcover or hardcover.

Seven Masters: 20th-Century Japanese Woodblock Prints was organized by the Minneapolis Institute of Art and is toured by International Arts & Artists, Washington, DC. Its presentation at the Weatherspoon Art Museum was facilitated by Elaine D. Gustafson, Curator of Collections.

About the Minneapolis Institute of Art’s Collection
Home to more than 90,000 works of art representing 5,000 years of world history, the Minneapolis Institute of Art (Mia) inspires wonder, spurs creativity, and nourishes the imagination. With extraordinary exhibitions and one of the finest wide-ranging art collections in the country—Rembrandt to van Gogh, Monet to Matisse, Asian to African—Mia links the past to the present, enables global conversations, and offers an exceptional setting for inspiration.

International Arts & Artists in Washington, DC, is a nonprofit arts service organization dedicated to increasing cross-cultural understanding and exposure to the arts internationally, through exhibitions, programs and services to artists, arts institutions and the public. Visit www.ArtsandArtists.org

The Story Behind the Beauty: Geisha, New Women, and Social Reformers
Wednesday, September 22, 4pm, virtual event
Jan Bardsley, Professor Emerita, Department of Asian and Middle Eastern Studies, UNC Chapel Hill
Prints popular at home and abroad in the 1910s depicted Japanese women in beauty prints as tranquil. Behind the scenes, however, controversies brewed over the role women should play in modern life. Debates over the “Woman Question” brought differences among women’s groups to the fore, sowing divisions and unusual alliances. Looking at conflict among elite geisha, literary New Women, reformers of the Japan Woman’s Christian Temperance Union, and even visiting women from the United States tells the contentious story behind the Japanese beauty in 1910s prints. Jan Bardsley's most recent book is titled Maiko Masquerade: Crafting Geisha Girlhood in Japan (UC Press, 2021).

How Do I Look: Seven Masters
Friday, October 1, 4pm, virtual event
James Anderson, Associate Professor, History, and Chiaki Takagi, Senior Lecturer of Japanese and Asian Studies, UNCG
In what ways do our experiences and knowledge shape how we see? Join us as we invite experts from across diverse academic disciplines and professional fields to help us uncover new ways of seeing artworks at the Weatherspoon. This session will include James Anderson and Chiaki Takagi, faculty in the departments of history and literature, languages, and culture, examine artwork from Seven Masters: 20th-Century Japanese Woodblock Prints.

The Women of Shin Hanga
Tuesday, November 16, 8pm, virtual event
Nozomi Naoi, Assistant Professor of Art History, Yale-NUS, Singapore
During the early 20th century, Japan experienced radical social and political change resulting from modernization, urbanization, and Westernization. The Shin Hanga movement responded to this cultural climate by embracing both modernity and traditional Japanese aesthetics. Beauty prints were especially important in highlighting elements of nostalgia and modernity. Nozomi Naoi examines these beauties in the context of the era and how they connect to visual media in Japan today.

Guided + Self-Guided Visits
School and community groups are invited to visit the museum on their own or via a docent-led tour. Admission and tours are free. Please contact us at least three weeks in advance to schedule your visit, (336) 334-5770 or weatherspoon@uncg.edu.