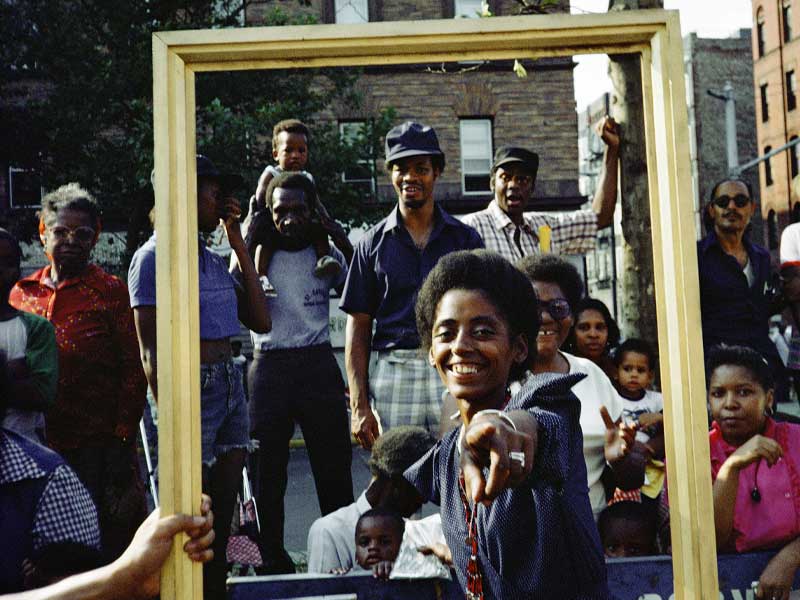 The Weatherspoon Art Museum at UNC Greensboro is thrilled to announce a retrospective of pioneering conceptual artist Lorraine O’Grady. The exhibition opens on January 8, 2022 at the Weatherspoon Art Museum and is organized by the Brooklyn Museum. Lorraine O’Grady: Both/And spans four decades of the artist’s career and features nearly all the artist’s major projects, including the Mlle Bourgeoise Noire trilogy, Rivers, First Draft, and Body Is the Ground of My Experience, plus a wide selection of archival materials on view for the first time. The exhibition also features the critically acclaimed new body of work titled Announcement of a New Persona (Performances to Come!).

Lorraine O’Grady: Both/And is the first comprehensive overview of the work of Lorraine O’Grady (b. Boston, 1934), one of the most significant figures in contemporary performance, conceptual, and feminist art. O'Grady is widely known for her radical persona Mlle Bourgeoise Noire and has a complex practice that also encompasses video, photomontage, concrete poetry, cultural criticism, and public art. The artist has consistently been ahead of her time, anticipating contemporary art world conversations about racism, sexism, institutional inequities, and cultural oversights. Her prescience has inspired younger generations of artists. Lorraine O’Grady: Both/And marks the first time O’Grady’s four decades of artistic output has been given its much-deserved institutional credit. The exhibition is curated by Catherine Morris, Sackler Senior Curator Elizabeth A. Sackler Center for Feminist Art, Brooklyn Museum, and writer and critic Aruna D’Souza, with Jenée-Daria Strand, Curatorial Assistant, Elizabeth A. Sackler Center for Feminist Art, Brooklyn Museum.

"We are honored that UNC Greensboro’s Weatherspoon Art Museum is the first venue for this critically acclaimed exhibition, after opening in New York last summer,” said Chancellor Franklin D. Gilliam, Jr. “There is so much for us to learn from Lorraine O’Grady’s considered life and artistic output, including her daring, her forward thinking, and her courage to make an impact. These are all qualities we hope will inspire our students and community."

Juliette Bianco, the Anne and Ben Cone Memorial Endowed Director of the Weatherspoon Art Museum, said “Lorraine O’Grady has consistently challenged societal and artistic norms by creating work rooted in her own identity and experiences. We chose to mount this exhibition at the Weatherspoon to provide our students and community an unprecedented opportunity to connect with forty years of creative thinking, action, and artistic practice from one of the most impactful thinkers, writers, and artists of our time.”

Raised in Boston by middle-class Jamaican immigrant parents and educated at Wellesley College, O’Grady began her career as a visual artist at the age of forty-five. She had spent years working as an intelligence analyst for the United States government, a translator, a rock music critic for The Village Voice and Rolling Stone, and a literature instructor at the School of Visual Arts. In part, her encounter with the Just Above Midtown (JAM) gallery in the late 1970s (and its community of African-American artists and other artists of color) prompted her to begin her artistic career. Some of her most important early performances were attempts to lay bare what she recognized as the art world’s deeply segregated nature. At the same time, O’Grady has continually imagined her own history, body, relationships, and biography within a cultural landscape that often erases or obscures Black female subjectivity.

These parallel threads—of outward-facing critique and inward-turning self-reflection—are some of the many binaries that O’Grady’s work addresses. By putting seemingly contradictory ideas into proximity and refusing the possibility of resolution, O’Grady seeks to undermine the power and hierarchy that usually attaches to such oppositions as black and white, museum and individual, self and other, West and non-West, and past and present. The exhibition’s subtitle Both/And alludes to O’Grady’s ambitious goal of dismantling the either/or thinking that forms the basis of much of Western thought and its attendant structural inequalities.

Both/And will fill all four of the Weatherspoon’s second-floor galleries. Alongside each of O’Grady’s foundational projects will be a critical selection of materials from the artist’s personal archive, which shed light on the careful decision-making and ambitious intellectual range of her creative process. This ephemera, fastidiously preserved by O’Grady, is now housed at her alma mater, Wellesley College, and includes correspondence with Adrian Piper, Kobena Mercer, Lucy R. Lippard, and Martha Wilson, along with drafts of writings, journals, interviews, and photographs.

The exhibition begins in the Bob and Lissa Shelley McDowell Gallery, with O’Grady’s 1982 performance Rivers, First Draft, a conceptual source of many of the ideas that would go on to animate the artist’s career. A one-time performance staged in a secluded corner of Central Park before a few dozen spectators, the complex event lives on as a carefully constructed photo installation. Rivers, First Draft draws upon practices ranging from Dada cabaret and contemporary theater to West African Vodun symbolism to narrate O’Grady’s transition from child to teenager to adult artist. The performance speaks to the double bind Black women face, excluded from white spaces because of their race and Black spaces because of their gender.

Projects focused on O’Grady’s critique of the art world’s unexamined cultural assumptions and the institutional structures it has built to support them include Mlle Bourgeoise Noire (1980), Art Is… (1983) and The Black and White Show (1983), each of which pinpoint how the art world excluded Black people both as artists and as audiences. O’Grady made each of these works, produced between 1980 and 1983, while in the guise of her performance persona, Mlle Bourgeoise Noire (Miss Black Middle Class). The character, an aging beauty queen wearing an evening gown made from 180 pairs of secondhand white gloves, appeared in O’Grady’s landmark guerrilla performances at both Black and “mainstream” (white) cultural institutions in New York City such as JAM and the New Museum. In Art Is…, she responded to a Black acquaintance’s assertion that “avant-garde art doesn’t have anything to do with Black people” by creating a conceptual artwork for the largest public Black space she could envision: a parade float at Harlem’s annual African American Day Parade. In The Black and White Show, Mlle Bourgeoise Noire invited thirteen pairs of artists—half of them Black, half white—to contribute works in a black-and-white color palette to her exhibition at the important Black owned Kenkeleba Gallery. In each of these works, the artist’s piercing critique of the racism and sexism of the art world established her as an active voice in the alternative New York art scene.
This gallery’s installation culminates with the newly debuted work Announcement of a New Persona (Performances To Come!), which offers a recontextualization of the driving concepts and complex narratives that form the basis of Lorraine O’Grady’s entire career. While much of the project remains secret, O’Grady says that the work consists of a four-part series of character studies in the form of life-size cartes de-visites for a performance she has been developing since 2013. Though it is a complete work in itself, the series also signals future possibilities for performances and critiques centered around the new persona.

The museum’s Gallery 6 will feature the 18-minute video installation Landscape (Western Hemisphere) (2010–2012), next to which the Gregory D. Ivy Gallery will feature photo collages from the artist’s series Body Is the Ground of My Experience (1992), including the diptych The Clearing: or Cortés and La Malinche, Thomas Jefferson and Sally Hemings, N. and Me. Perhaps one of O’Grady’s most controversial and misunderstood works, it imagines even the most intimate relationships between Black and white people to be inevitably shaped by the deep history of racism and colonialism in which they occur. Finally, the Guild Gallery will offer a rare opportunity to see in its entirety Miscegenated Family Album, one of O’Grady’s best-known works.

Lorraine O’Grady: Both/And is accompanied by a catalogue documenting the entire span of O’Grady’s artistic career, the first publication to do so. Concurrently, a volume of collected writings, Writing in Space: 1973–2019, edited by D’Souza for Duke University Press, brings together O’Grady’s extensive and important theoretical and critical writings.

For a complete, updated list of Weatherspoon programs, visit https://weatherspoonart.org/calendar/

Mission
The Weatherspoon Art Museum at UNC Greensboro enriches the lives of diverse individuals and connects multiple communities, both on and off campus, by presenting, interpreting, and collecting modern and contemporary art. In recognizing its paramount role of public service, the Weatherspoon fosters an appreciation of the ability of art to positively impact lives.

History
The Weatherspoon Art Museum at UNC Greensboro was founded by Gregory Ivy in 1941 and is the earliest of any art facilities within the UNC system. The museum was founded as a resource for the campus, community, and region and its early leadership developed an emphasis—maintained to this day—on presenting and acquiring modern and contemporary works of art. A 1950 bequest from the renowned collection of Claribel and Etta Cone, including prints and bronzes by Henri Matisse and other works on paper by American and European modernists, helped establish the Weatherspoon’s permanent collection. During Ivy’s tenure, other prescient acquisitions included a 1951 suspended mobile by Alexander Calder, Willem de Kooning’s pivotal 1949-50 Woman, and the first drawings by Eva Hesse and Robert Smithson to enter a museum collection.

In 1989, the museum moved into its present location in The Anne and Benjamin Cone Building designed by the architectural firm Mitchell Giurgula. The museum has six galleries and a sculpture courtyard with over 17,000 square feet of exhibition space. The American Alliance of Museums accredited the Weatherspoon in 1995 and renewed its accreditation in 2005 and 2015.

Collections + Exhibitions
The permanent collection of the Weatherspoon Art Museum is one of the foremost of its kind in the Southeast. It represents all major art movements from the beginning of the 20th century to the present. Among the nearly 6,200 works in the collection are pieces by such prominent figures as Henry Ossawa Tanner, Edward Weston, Joseph Stella, David Smith, Jackson Pollock, Elizabeth Catlett, Louise Nevelson, Gordon Parks, Sol LeWitt, Robert Mangold, Cindy Sherman, Adrian Piper, Betye Saar, Amy Silman, Nick Cave, Jennifer Steinkamp, and Sanford Biggers. The museum regularly lends to major exhibitions nationally and internationally.

The Weatherspoon is also known for its dynamic exhibition program. Through a lively annual calendar of exhibitions and a multi-disciplinary educational program for audiences of all ages, the museum provides an opportunity for visitors to consider artistic, cultural, and social issues of our time—enriching the life of our university, community, and region.

UNC Greensboro
UNC Greensboro, located in the Piedmont Triad region of North Carolina, is one of only 50 doctoral institutions recognized by the Carnegie Foundation for both higher research activity and community engagement. Founded in 1891 and one of the original three UNC system institutions, UNC Greensboro is one of the most diverse universities in the state with 20,000+ students, and 2,700+ faculty and staff members representing 90+ nationalities. With 17 Division I athletic teams, 85 undergraduate degrees in over 125 areas of study, as well as 74 master’s and 32 doctoral programs, UNC Greensboro is consistently recognized nationally among the top universities for academic excellence and value, with noted strengths in health and wellness, visual and performing arts, nursing, education, and more. For additional information, please visit uncg.edu and follow UNCG on Facebook, Twitter, and Instagram.