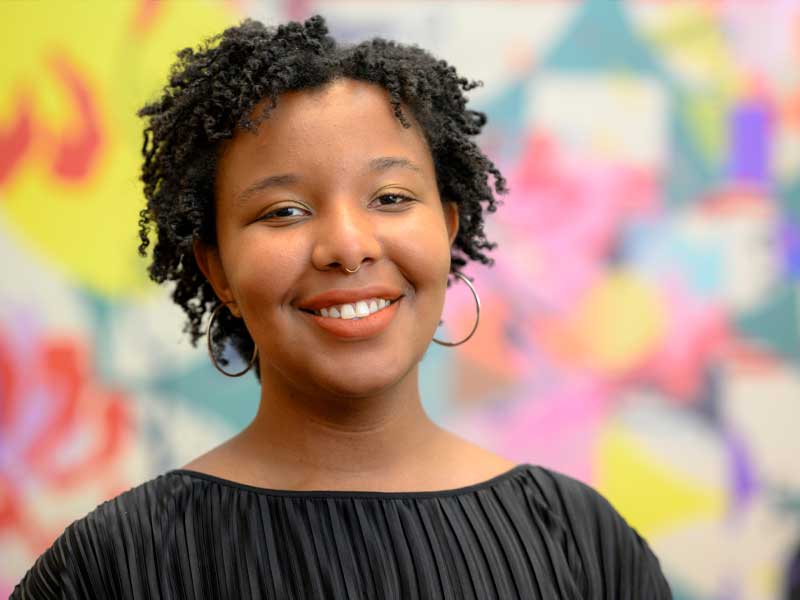 The Weatherspoon Art Museum at UNC Greensboro is pleased to announce the appointment of Destiny Hemphill as its coordinating curator of community engagement, a newly created position at the museum supported by a grant from the Terra Foundation for American Art.

Hemphill comes to the Weatherspoon from North Carolina A&T State University, where she was an instructor of creative writing. While at NC A&T, she facilitated student encounters with creative texts, visual art, film, and music and helped students use art to build a critical lexicon that expanded their sense of what is possible in the world. A recent graduate of a research-intensive MFA program, Hemphill has rigorously investigated the sociohistorical conditions of art and its complicated existing narratives, and she has worked to recover subjugated narratives.

As coordinating curator of community engagement, Ms. Hemphill will help to spearhead the Weatherspoon’s grant-funded initiative Leading with Objects: Engaging the Community in Institutional Change, which is also supported by a recent grant to the Weatherspoon from The Henry Luce Foundation. This initiative will impact the museum’s practice and, by extension, its role within the community and will build upon the museum’s racial equity plan, Leading Together, as it guides the museum’s broader work on equity, diversity, and inclusion.

Juliette Bianco, the Anne and Ben Cone Memorial Endowed Director of the Weatherspoon Art Museum, says, “We are excited to welcome Destiny Hemphill to the Weatherspoon Art Museum in this new role. She brings knowledge, affinities, and experience that are strongly connected to the Weatherspoon’s focus on learning through engaging with art and one another. Her passion for collaboration and community makes her an ideal team member as we work to facilitate broader access to the museum’s American art collection through community-driven dialogue.”

About her new role at the Weatherspoon, Ms. Hemphill says, “I was drawn to this position because of an alignment in values. From participating in multimodal arts collectives to presenting my own poetry to my years of community organizing, I have intentionally structured my life around arts and community because I know them firsthand to be incredible sources of power and transformation.”

Hemphill is also a poet based in Durham, North Carolina. She is the author of the chapbook Oracle: A Cosmology (Honeysuckle Press, 2018), which was a finalist for Honeysuckle Press’s inaugural chapbook prize. In 2021 she served as a Pedagogy Lab fellow at the Center for Black, Brown, and Queer Studies. Hemphill was also a remote Poetry Coalition fellow (2020–2021) at Split This Rock in Washington, D.C.

Prior to her work at NC A&T, Hemphill was a featured reader for the North Carolina Book Festival, and her poem “how we got our blues-tongue” was included in Poetry Magazine in January 2020. She was an arts administration intern for Duke Performances and a teaching artist for BlackSpace Poetry Wokeshops in Durham, NC, and she was a 2017 Callaloo Fellow and a 2016 Amiri Baraka Scholar at Naropa University’s Summer Writing Program. Her work has also been featured in Narrative Northeast, The Wanderer, Winter Tangerine, Scalawag, and elsewhere.

Mission
The Weatherspoon Art Museum at UNC Greensboro enriches the lives of diverse individuals and connects multiple communities, both on and off campus, by presenting, interpreting, and collecting modern and contemporary art. In recognizing its paramount role of public service, the Weatherspoon fosters an appreciation of the ability of art to positively impact lives.

History
The Weatherspoon Art Museum at UNC Greensboro was founded by Gregory Ivy in 1941 and is the earliest of any art facilities within the UNC system. The museum was founded as a resource for the campus, community, and region and its early leadership developed an emphasis—maintained to this day—on presenting and acquiring modern and contemporary works of art. A 1950 bequest from the renowned collection of Claribel and Etta Cone, which included prints and bronzes by Henri Matisse and other works on paper by American and European modernists, helped to establish the Weatherspoon’s permanent collection.

In 1989, the museum moved into its present location in The Anne and Benjamin Cone Building designed by the architectural firm Mitchell Giurgula. The museum has six galleries and a sculpture courtyard with over 17,000 square feet of exhibition space. The American Alliance of Museums accredited the Weatherspoon in 1995 and renewed its accreditation in 2005 and 2015.

Collections + Exhibitions
The permanent collection of the Weatherspoon Art Museum is considered to be one of the foremost of its kind in the Southeast. It represents all major art movements from the beginning of the 20th century to the present. Among the nearly 6,200 works in the collection are pieces by such prominent figures as Henry Ossawa Tanner, Edward Weston, Joseph Stella, David Smith, Jackson Pollock, Elizabeth Catlett, Louise Nevelson, Gordon Parks, Sol LeWitt, Robert Mangold, Cindy Sherman, Adrian Piper, Betye Saar, Amy Silman, Nick Cave, Jennifer Steinkamp, and Sanford Biggers. The museum regularly lends to major exhibitions nationally and internationally.

The Weatherspoon also is known for its dynamic exhibition program. Through a lively annual calendar of exhibitions and a multi-disciplinary educational program for audiences of all ages, the museum provides an opportunity for visitors to consider artistic, cultural, and social issues of our time—enriching the life of our university, community, and region.

UNC Greensboro
Led by Chancellor Franklin D. Gilliam, Jr., UNC Greensboro is 1 of only 59 doctoral institutions recognized by the Carnegie Foundation for both higher research activity and community engagement. Founded in 1891 and one of the original three UNC System institutions, UNC Greensboro is one of the most diverse universities in NC with 20,000+ students, and 3,000+ faculty and staff members from 90+ nationalities. With 17 Division I athletic teams, 85 undergraduate degrees in over 125 areas of study, as well as 74 master’s and 32 doctoral programs, UNC Greensboro is consistently recognized nationally among the top universities for academic excellence and value. For additional information, please visit uncg.edu and follow UNCG on Facebook, Twitter, and Instagram.