The Weatherspoon is excited to announce the acquisition of two drawings and stop-motion videos by artist and Greensboro native Jason Mitcham. Roadway Horizon #4 and Battlefield come from the artist’s poignant series Destiny Manifested. Mitcham describes the project as an examination of the American landscape focused on better understanding how our constructed environments “divide us, corral us, and ensure a power structure as we become a part of them, and they become a part of us.”

Read an interview with the artist and view both works HERE. 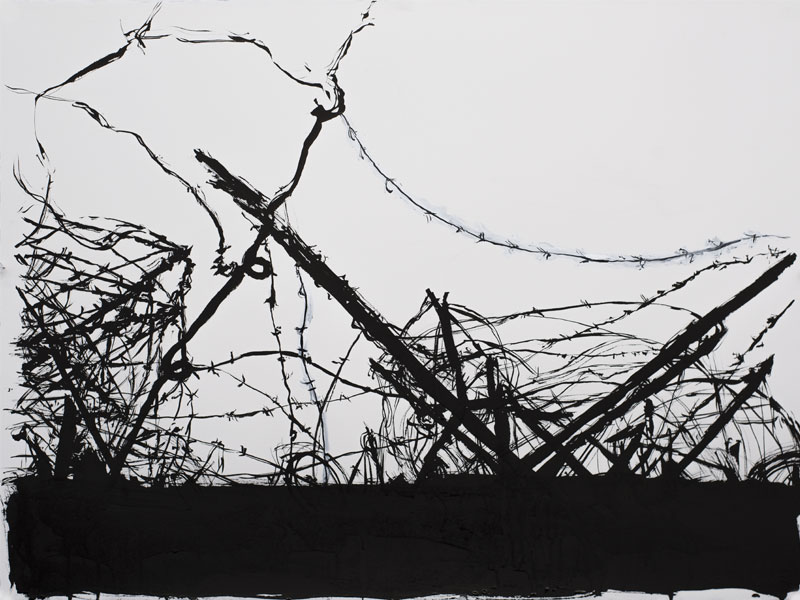 Repent is part of a series of six prints by Joyce J. Scott entitled Soul Erased that delicately addresses the theme of bad behavior. The six ethereal images tell the story of a mischievous Black boy who gets into trouble in his community. His wayward conduct leads an angel to warn him that unless he stops misbehaving, he will be taken away. When no change transpires, two angels remove him and hang him upside down so that he can be reborn again and given another chance. Repent illustrates the moment in the story when the dancing, carefree boy encounters and is cautioned about misbehaving by the flaming red angel. This print exemplifies Scott’s lifelong spirituality, and the series is one of her most ambitious forays into printmaking to date.

Best known for her exuberant jewelry and figurative sculptures made of blown glass and beads, two of which are also part of the Weatherspoon’s collection, Scott is a fiber artist, printmaker, performer, vocalist, installation practitioner, lecturer, and educator. In 2016 she received a MacArthur “Genius” Award and in 2019 was named a Smithsonian Institute Visionary Artist. Scott creates intriguing objects rife with sharp social commentary and drawn from her African American heritage, including such themes as cultural stereotypes, violence, racism, classism, and sexism. 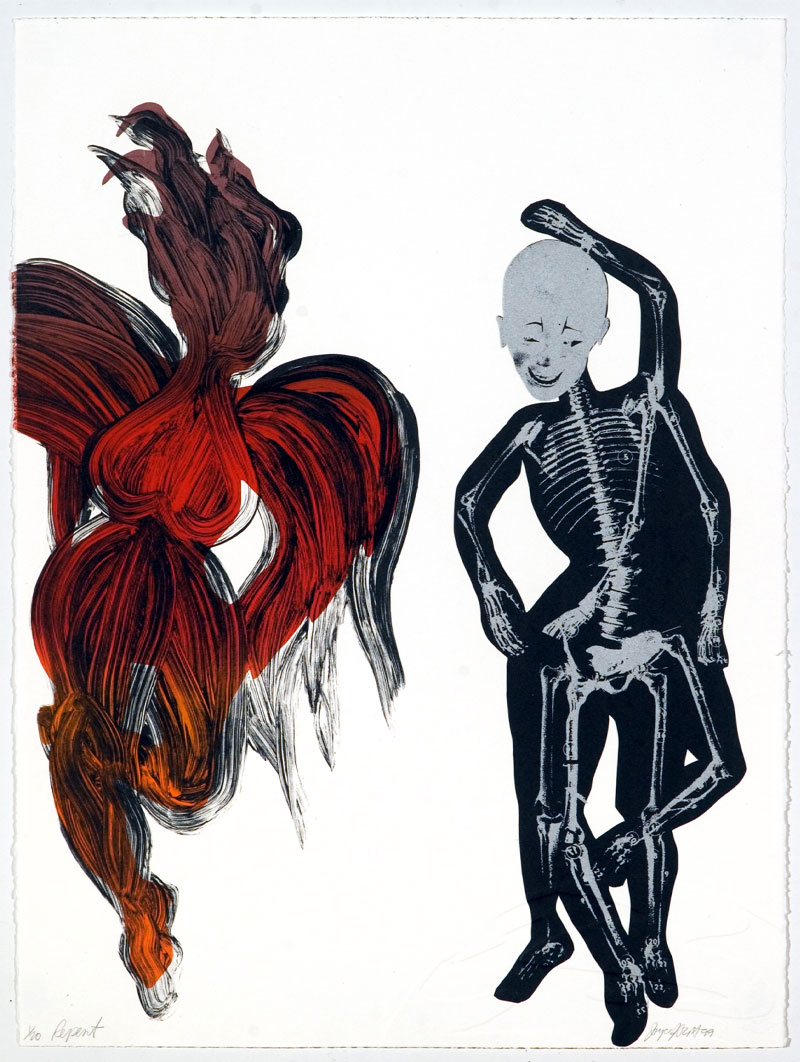 Eight works on paper by self-taught artist James Castle recently were donated to the Weatherspoon by the artist’s archive. Museum visitors may recall seeing Castle’s soot drawings in the exhibition, Inside the Outside: Artists from the William Louis-Dreyfus Foundation in 2016. Although diverse in theme—from landscape and figures to cultural products and advertising—each drawing illustrates the artist’s interest in line, shape, and tonal smudges.

Castle lived in isolation his entire life due to location and condition. Deaf and mute, he resided on remote family ranches in Idaho, far away from any art communities. Castle’s parents were rural postmasters whose home also served as a general store. The family’s businesses inspired the artist, who used paper from mail catalogues and advertisements for groceries as art materials. Castle also repurposed the packaging, twine, heavy cloth, and leather that were a part of the family businesses as inspiration and artistic materials. In addition, he created his own inks and graphite from soot collected from the wood-burning stove and other crushed materials mixed with his saliva. The Weatherspoon is pleased to add these striking drawings to its renowned collection of works on paper. 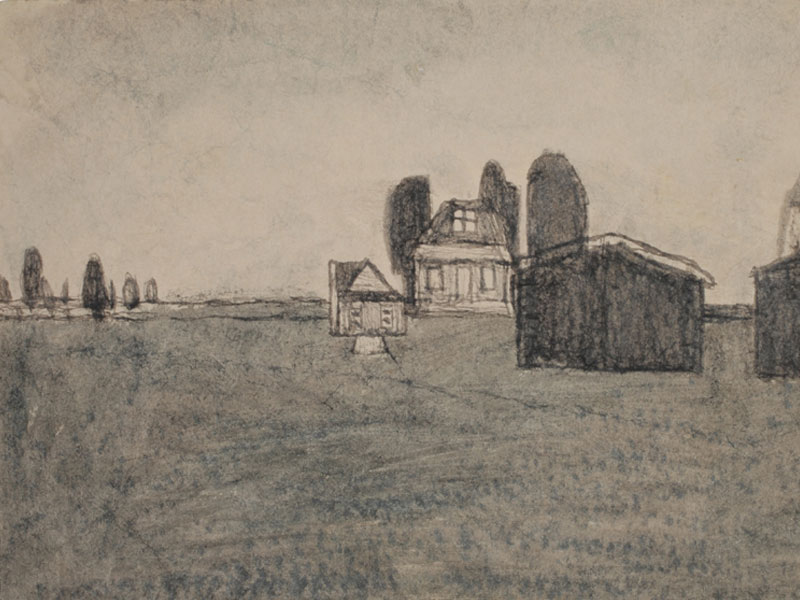 Thanks to a generous gift from Seymour and Carol Cole Levin, the Weatherspoon is honored to add to its collection two artworks by Gina Adams, both of which are currently featured in To the Hoop: Basketball and Contemporary Art. Acknowledging both her Native and colonial ancestry, Adams mines histories of cultural preservation and forced assimilation. In that context, basketball holds mixed connotations for her. She acknowledges that many Native Americans see the game as a path to both higher education and acceptance into popular culture. But, she also notes that basketball’s history in Native communities goes back to early twentieth-century boarding schools that forced indigenous students to assimilate to White culture. Covered with her own hybrid vocabulary of designs inspired by those found in Native arts, Adams’s ceramic basketball and enlarged archival photograph bear witness to these conflicting associations. 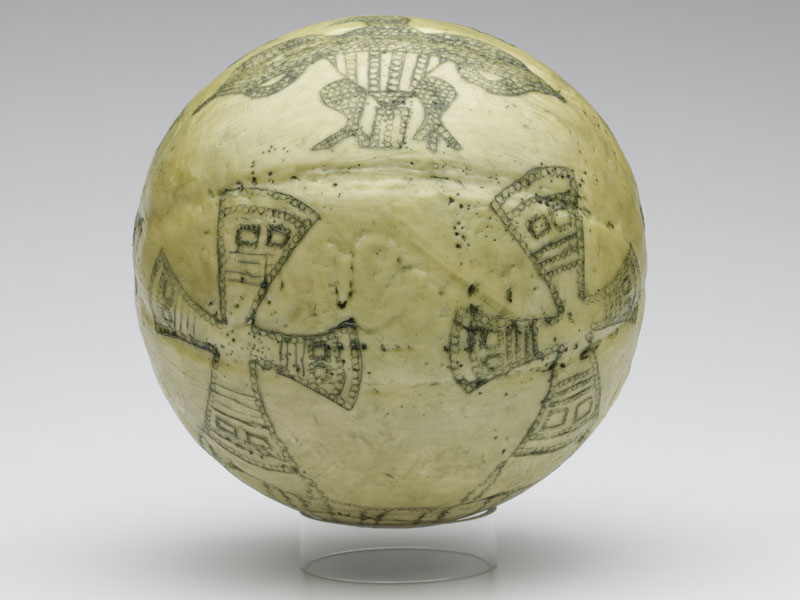 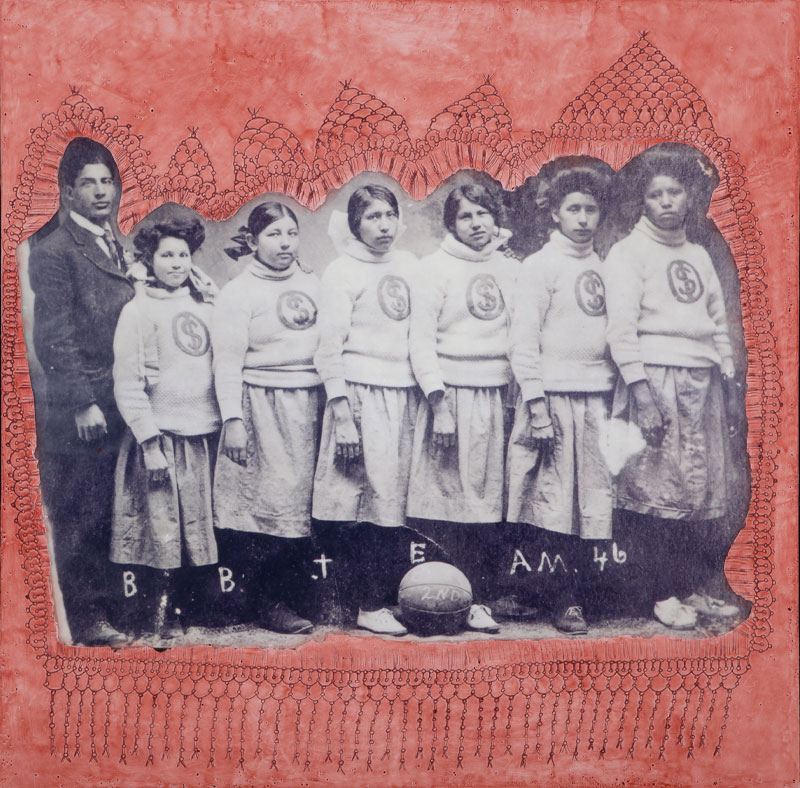 William Christenberry is known for his elegiac photographs made largely in Hale County, a small rural area in central Alabama. His images memorialize the South and speak without nostalgia of the passage of time and how the past is embedded in our experience of the present.

At the start of his career, Christenberry used a Kodak Brownie camera he’d been gifted as a child to photograph images as studies for the content of paintings. His first photographs were black and white portraits of ramshackled buildings, as here. Soon thereafter he began to use color film in an effort to capture a sense of the presence of the original structures within the surrounding landscape of rural Alabama. The Weatherspoon owns one of these later images as well.

Near Stewart Alabama illustrates Christenberry’s relationship with Walker Evans, an earlier American photographer who had visited Hale County, Alabama, on assignment for the Farm Service Administration and then again in 1936 for Fortune Magazine along with the writer James Agee, gathering material that formed the basis of their 1941 book Let Us Now Praise Famous Men. The book had a profound influence on Christenberry; in turn, when Evans met the younger artist in the early 1960s, he called Christenberry’s Brownie photographs “perfect little poems.” 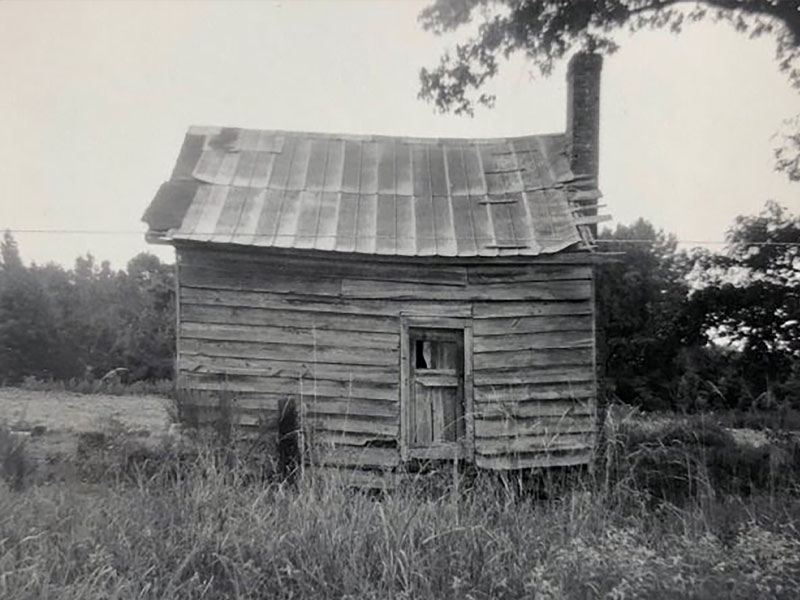 Elizabeth Talford Scott's title for this artwork cites the traditional craft techniques used in its creation and evokes its narrative theme. As is typical of Scott’s quilts and wall works, the piece is composed of everyday materials–here simply cotton and thread–and features intense colors. Scott often utilized techniques based on African craft traditions, such as stripping, piecing, and appliqué, and included symbols of (or actual elements from) the natural world–from rocks and buttons to stars and insects–as both personal spiritual references and as a means to elicit emotions in the viewer. Through such abstraction, she drew upon memory to chronicle her own family’s life experiences and, by extension, that of the broader African-American community, offering joy, respite, and celebration while engaging the past.

During her lifetime Scott exhibited in New York at the Studio Museum of Harlem, the Museum of American Folk Art, and the Metropolitan Museum of Art. In 1998, the Maryland Institute College of Art mounted a retrospective exhibition titled Eyewinkers, Tumbleturds, and Candlebugs: The Art of Elizabeth Talford Scott, which featured Knots and Snakes. 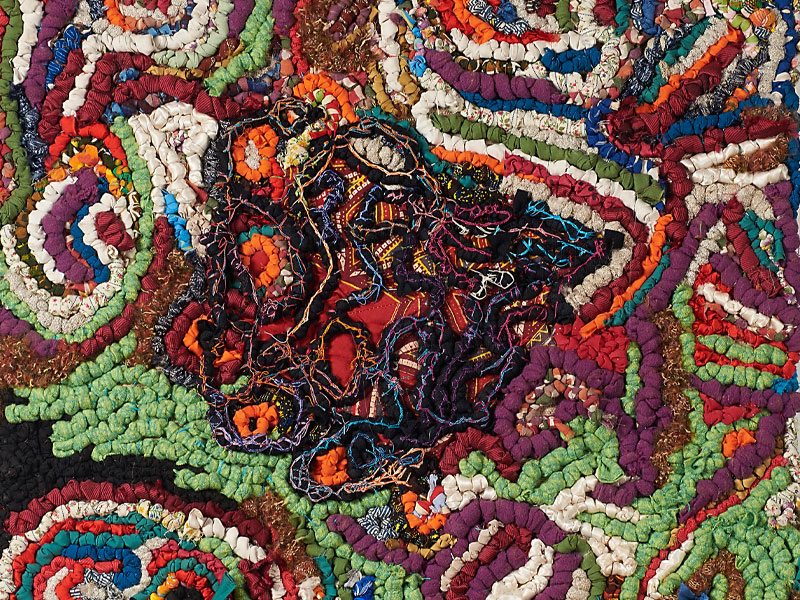 What motivates people, at great expense of time, money, and effort, to visit famous sites of wonder and curiosity? In the early 1980s, Roger Minick sought to find out. Minick is widely known for his series of photographs called Sightseer that documented tourists visiting national parks across the United States. Woman with Scarf at Inspiration Point, Yosemite National Park, California belongs to this series and is Minick’s most famous image.

Unlike earlier landscape photographers who primarily were attracted to nature’s grandeur, such as Carleton Watkins, Eadweard Muybridge, and Ansel Adams, Minick was more interested in capturing the cross-section of sightseers who visited these historic sites. Created just as he started using color film, the series conveys the irony and humor he saw in the vivid colors and illuminating styles of the sightseers’ clothing, especially when juxtaposed against the surrounding landscape. This image shows a woman with her back to the photographer admiring the breath-taking view—one that happens to be printed on her headscarf that she likely purchased from Yosemite’s gift shop. Her position posed between two crevices also mimics that of the waterfall printed on the scarf. Minick’s image succinctly transmits the awe of encountering something of iconic beauty, the tradition of taking the obligatory snapshot to prove that you witnessed it, and the acquisition of a souvenir to commemorate the experience. 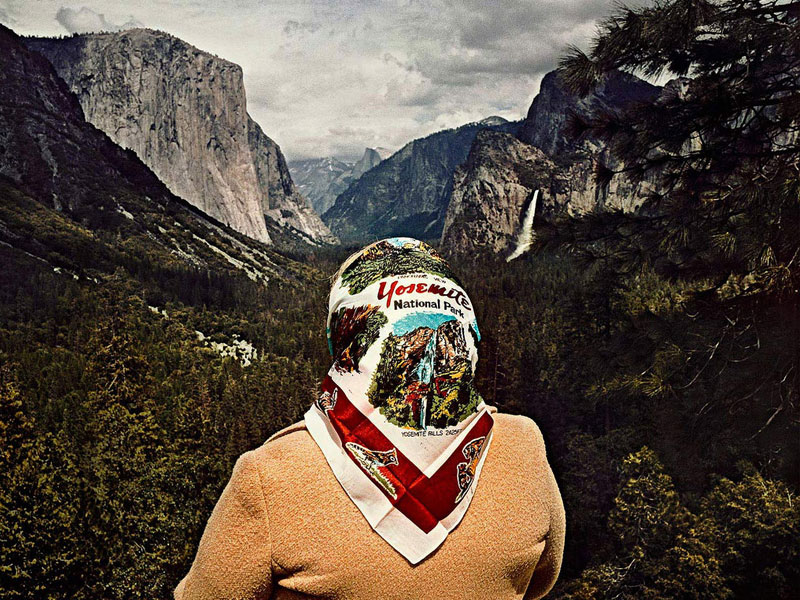