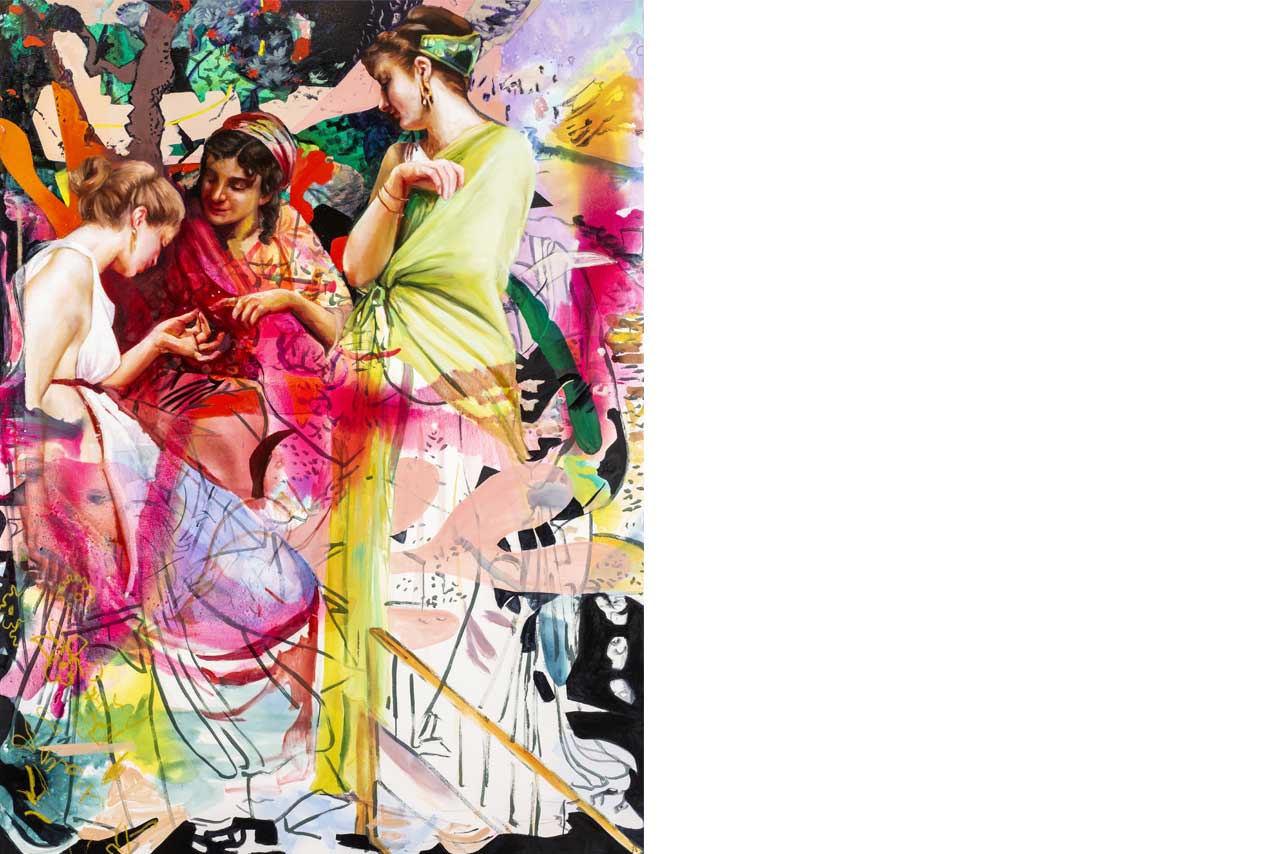 Angela Fraleigh, Splinters of a secret sky, 2021 (detail). Oil on canvas, individual painting from larger installation, 96 x 72 in. © Angela Fraleigh
In Angela Fraleigh’s dynamic paintings, female subjects culled from art history become active protagonists in newly imagined spaces. In their original contexts, these figures were largely painted as docile objects for the male gaze. Fraleigh, however, reimagines them in dreamlike scenes where they exist for one another instead. They converse, engage, and share—they acknowledge the eyes upon them, look back at the viewer, and then return to one another.

At the turn of the 20th-century, the Cone sisters were faithful to tradition in so many ways, yet also defied expectations. While devoted to family and committed to decorum, they sidestepped marriage and motherhood, instead wedding themselves to the intrepid pursuit of art. Financially independent thanks to their family’s successful textile business, they traveled in style to Europe where they spent time in artists’ studios, befriending and supporting two poor, young, emerging leaders of the avant-garde: Henri Matisse and Pablo Picasso. From them and others, the Cones amassed a collection of vibrant, daring artworks.

Anglea Fraleigh’s new trio of paintings will take visual cues from their stunning collection, including works the sisters gifted to the Weatherspoon and others that they left to the Baltimore Museum of Art. Layering these modernist references with older art historical imagery, Fraleigh conjures a dense tableau—one that celebrates the sisters’ brilliant artistic eyes and patronage while also embracing the depth and complexity of their story as a marker of the richness of women’s stories throughout history.

Angela Fraleigh earned her MFA from Yale University School of Art and her BFA from Boston University. She has had solo shows at the Delaware Art Museum, Wilmington, DE; the Edward Hopper House Museum, Nyack, NY; the Everson Museum of Art, Syracuse, NY; and the Vanderbilt Mansion, Hyde Park, NY. Her artist residencies include the Bemis Center for Contemporary Arts, Omaha, NE; the Kemper Art Museum, Kansas City, MO; and the Core Program, Glassell School of Art MFAH, Houston, TX. She is currently a Professor of Art at Moravian College in Bethlehem, PA.

This exhibition is organized by Dr. Emily Stamey, Curator of Exhibitions. The Falk Visting Artist program is a partnership between the Weatherspoon Art Museum and the UNC Greensboro School of Art.