Artists Kendell Carter, André Leon Gray, and Victor Solomon approach race, spirituality, and basketball in ways that are intimately personal and yet largely reflective of American pop culture. They sit down with Curator of Exhibitions Emily Stamey to talk about their work prior to COVID and this summer’s nation-wide BLM movement as well as their thoughts on making art in a new cultural landscape.

In all his work, Kendell Carter seeks to reward imaginative moves beyond clichés and stereotypes. Describing Meditation on Team (Waves for Scottie), an image of the artist on a bluff overlooking the Pacific Ocean, he notes, "It's an alternative to the idea of the physically heroic male athlete" whose success rests in physical strength and individual dominance." Carter received his MFA from California State University Long Beach. He lives and works in Los Angeles and is represented by Edward Cella Art & Architecture. Follow him @kendellcarterartist and www.edwardcella.com.

Using discarded objects, André Leon Gray crafts assemblages that speak to his interest in spirituality, philosophy, and black culture. Intended to evoke an African mask, Black Magic (It's Fantastic) presents a fierce visage--its cowrie-shell eyes bulging, painted teeth bared, and features framed by a mane of red shoelaces. He describes the work's title as "a play on the way some people see sports almost like a religion." Gray is a North Carolina-based self-trained artist. He has said that "tar is my signature medium and symbolic signifier, juxtaposed with discarded and reclaimed objects charged with sociopolitical meaning…to give the viewer a visual meal for the mind."  Follow him at @andreleongray and www.andreleongray.art.

Victor Solomon creates basketball backboards and hoops inspired by the décor of palaces and cathedrals. The homage is both sincere and sarcastic. Recalling his youth as a mixed-race kid in East Boston, he remembers that it was on basketball courts of his neighborhood that racial and ethnic distinctions disappeared; the game created a space in which participation was predicated on skill rather than skin color or family background. Solomon received his BFA from the Academy of Art University, San Francisco and later apprenticed with veteran stained-glass makers. Follow him @victorsolomon and www.literallyballing.com.

This program is held in conjunction To the Hoop: Basketball and Contemporary Art and is supported by a gift from Sherry Sherrill. 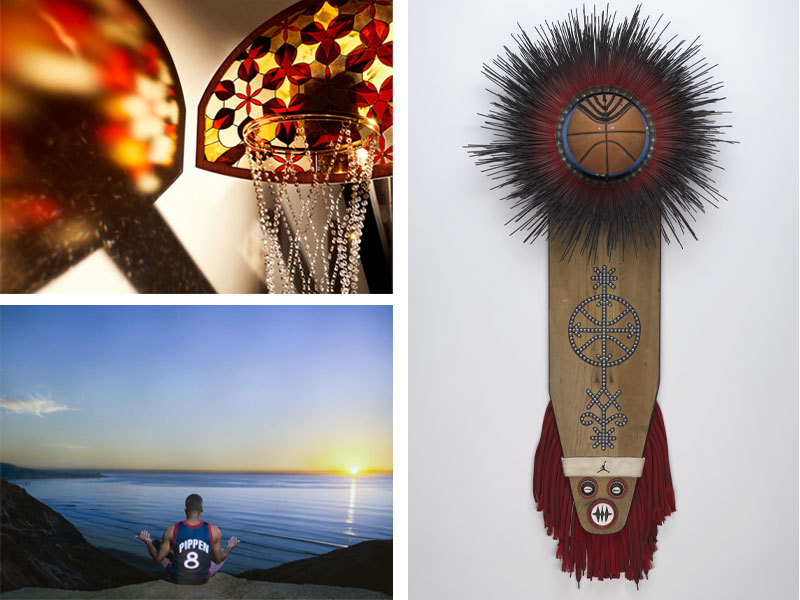