A Conversation with Sheena Rose

Since June, the Weatherspoon’s atrium has been enlivened with a dynamic new artwork by artist Sheena Rose, MFA ‘16. Filling an entire wall of this gathering space, the brightly colored work greets people as they enter, sits with students as they wait for classes to begin, and provides a lively backdrop for selfies and group photos.
As the artwork increasingly becomes a part of life at the Weatherspoon, curator Emily Stamey has been talking with Rose to learn more about the work’s origins and the artist’s hopes for the piece.
Sheena Rose, Pause and Breathe, We Got This (detail), 2021. Courtesy of the artist. © Sheena Rose. Photo: Martin W. Kane, University Communications, 2021. 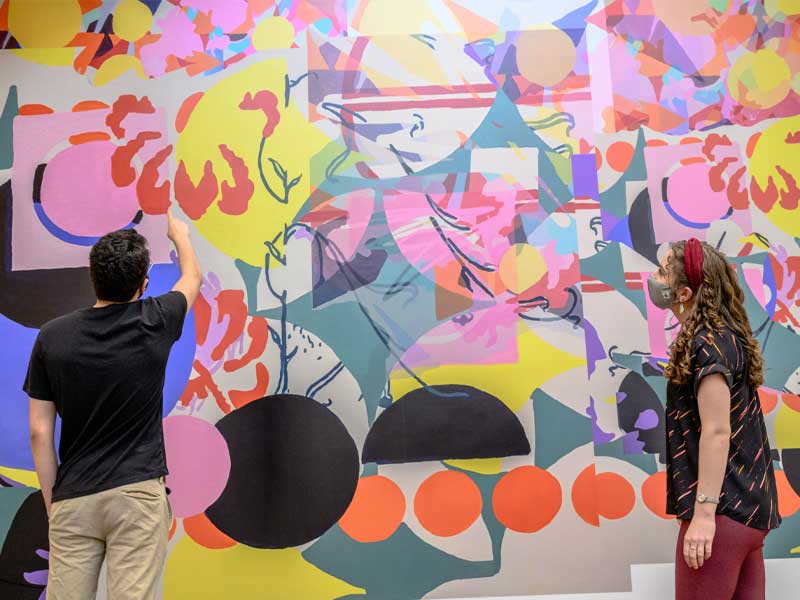 What were some of the first ideas that went through your head when the Weatherspoon approached you with the idea of doing a mural commission, and specifically one that might respond to the moment in which we found ourselves in the fall of 2020?

The first idea I had was to portray the cityscape of Greensboro and think about the history of UNCG and the Weatherspoon Art Museum, which have been important to me from my time as a student.

But, I was also inspired by a Ted Talk called “The End of Globalization (And the Beginning of Something New)” by the economist Mike O’Sullivan. He touched on ideas about how certain countries will move forward in the future, but he didn’t mention the Caribbean. That absence made me want to focus not just on Greensboro for this project, but to think about my home in Barbados and to highlight more global concerns so that more people can relate to the work. I made some sketches with greens, oranges, circles, and plants. These felt in control, in place, and unified.

But, it was also a tough time in terms of the pandemic. It was really rough in Barbados and had been causing some serious anxiety, fear, and panic. Barbados was having problems controlling the COVID-19 spread and had announced that we had a new variant. We were going into lockdown, and as I brainstormed for the piece, I realized that some of my other sketches definitely showed my anxiety. I had been choosing colors that felt like the inside of my body--pinks, reds, purples, yellows, and blues—during this time of fear.

At one point I looked at both sketches and said, “Wait a minute! I have the answer in my face.” And I started combining the two in Photoshop.

How was your process for working on this piece different from past large-scale projects?

For most of my past projects, I worked physically on canvas and then projected the photos of those images onto the wall and painted from them. The project for the Weatherspoon started off as a normal invitation to paint a mural in person, but the pandemic changed that process. We had to think, “what should we do next?” Should I send a sketch and instructions for the mural to the museum team to recreate? Could I just send a high-res image of the work and print it onto a wall? Both options made me nervous that something would be lost in translation.

So instead, I stepped back and decided to just let the work speak, to start making images and see where they took us. I relaxed a bit more and created sketches on canvases. Then, as I just explained, one night I played around with them in Photoshop and merged the two together. I was super excited with the digital work, but it was low-resolution and I knew we couldn’t enlarge it to go on a wall. What to do? The solution was for the museum to pair me with a graphic designer, April Bryant (who also graduated from UNCG). She and I corresponded back and forth over Zoom, transforming the piece into a high-quality file. By selecting and tracing every little detail from my original file—not just the shapes and colors, but even the spots where you could see my brush marks--April helped me change my file into a new file. It was a tedious process but, I found it so interesting how the work was transforming and revealing so many layers. Each time we worked together, I saw parts I hadn’t noticed before. 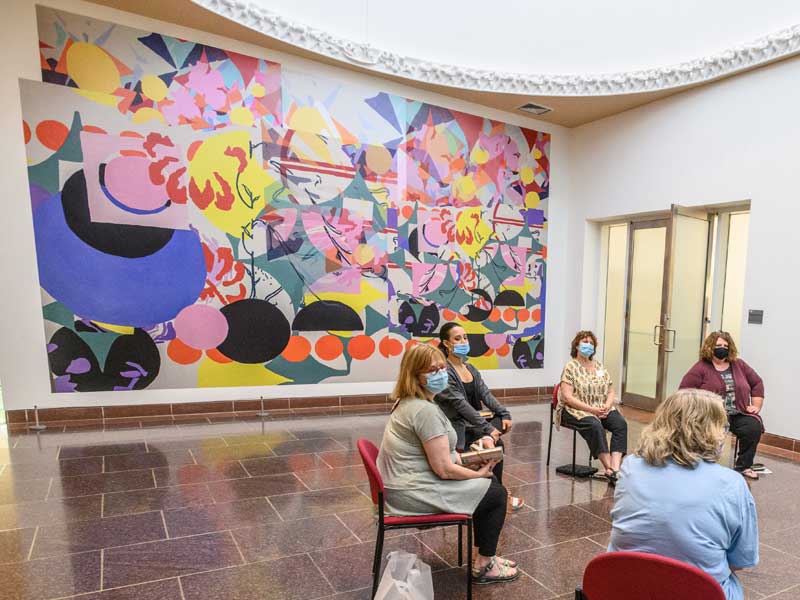 What do you like the most about the finished work?

At first, what I liked most was that the piece makes me very happy. I wanted something chaotic/conflicted, but yet beautiful, meditative, and peaceful. I needed to believe we could get through this pandemic by finding useful ways to cope with our anxiety, such as meditation, exercise, gardening, reading, communicating, sharing, helping, and opening our minds to new things and new habits. I believed we could make it through the weird times and I want people to feel honesty from the piece about fears and doubt, but also hope, peace, and positivity.